Armed with not much more than the tripadvisor iPhone app and sadly limited by our budget, my wonderful girlfriend and I explored the edible side of these two great culinary cities.  Both Paris and Brussels offer far to many food options to take in in one trip.  Part 1 of this post is Brussels, part 2 will be on Paris.

While Paris is famous world wide for its food options, Brussels is no stranger in culinary circles.  I have personally noticed a rise in the number of Belgian inspired gastropubs and restaurants which have been popping up in the U.S.  I think part of this trend is driven by an increasing popularity of Belgian beer.  Belgian food, much like Belgium its self is the result of a blending of cultures and tradition.  Located at a crossroads between the hearty meat and potatoes food of northern Europe and the refined cooking style of the French, Belgium gets the best of both worlds.  In addition, as the capital of the EU, Brussels has a very international feel and this is imparted on its food.  We were only in Brussels for 2 days,far too short of a stay in my opinion.

Rue des Chartreux 9, Brussels 1000, Belgium
We had attempted to find a restaurant called Fin de Siecle, a trendy well reviewed restaurant which we were told has no sign out front and a menu written on a chalk board inside.  We punched in the address and ended up at this place.  It was crowded and the food looked great so we figured this must be the place.  They don't take reservations and you must stay in the restaurant to hold your place in line.  While we were waiting i walked out side and saw another similar looking restaurant across the street which I believe was our original target.  I later found out that the one we ate at was a sister restaurant of Fin de Siecle.  I really have no idea what the name of this place was but it was good.  Meals were around 15-20 euro, cash only no reservations. Tripadvisor review 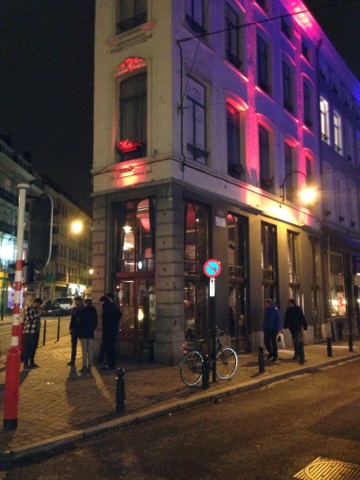 Rue Gheude 56 Brussels Belgium
If you like beer this place is well worth a visit.  This is the last remaining traditional lambic brewery in Brussels.  For those not familiar with the style, Lambic beer is brewed using wild yeast.  The unfermented beer is left exposed to the air and wild yeast take hold and work their magic.  This is the way beer was initially fermented thousands of years ago before people realized that it was yeast which caused fermentation to take place.  Fermentation by wild yeast is a much slower process and most of the beers offered here have to mature for 3 years before they are ready to be consumed.  The resulting beer is sour and acidic, unlike any other beer style.

The tour is self guided but very well organized.  They provide you with a brochure with numbers and you follow along with the numbered as you walk through the brewery.  The visit ends with 3 tastings.  Additional tastings and bottles are available for sale.  I was very happy to see that they had Zwanze available.  This is a limited release lambic that this year featured rhubarb.  I first heard about this beer because of an event called Zwanze Day, where a few select bars around the world were each provided a keg and they were all tapped at the same time.  I was at ChurchKey in D.C. during this event but sadly it sold out before i could try it.  This was well worth the effort to find.  I do have 2 warnings however; 1. it is a bit off the beaten path and 2. lambic beer might not be to everyones taste.


If you like seafood this place is not to be missed.  It is an open air fish market where you basically pick out what you want while it is still fresh on ice and they take it inside and cook it.  Each dish is made to order.  Be warned that this place can get very busy.  There are only a few tables set up outside and you have to stand while you are eating.  When we went it was close to freezing outside and there was still a crowd standing around eating.  We ordered razor clams, sea snails in broth, shrimp scampi, shrimp croquettes, and two beers.  Price was around 5 euros per dish and the 2 of us were filled with a 20 euro bill.  There is a reason this place is #2 on tripadvisor.  Review Here

Rue du Chene 5, Brussels, Belgium
We ate here for our first dinner of the trip.  The restaurant itself is very tiny, maybe 10 to 15 tables total.  When we arrived there were about 1/3 of them open however we were informed that they were all reserved and that we would have to sit at the bar if we wanted to stay.  The bar was kind of cramped and there was hardly enough room for 2 people to sit there but we decided to give it a try.  About 15 minutes later the restaurant was at capacity.  The food was very good and hearty.  I ordered a beef stew and my girlfriend ordered veal meat balls served with stoemp (mashed potatoes with vegetables).  Entrees were around 10-15 euro.  Trip advisor review

No trip to Belgium is complete without waffles and frites.  There are several stands all around the city.  Our waffle and frites were so-so, I had better the last time i was in Belgium.

Posted by Passport Physician at 4:13 PM